You are reading an archived issue of Sleet Magazine. To return to the current issue, click here. 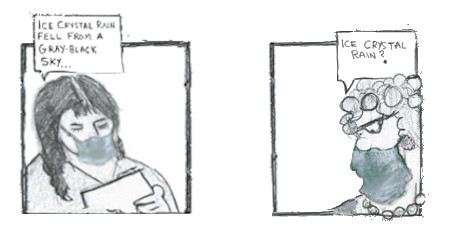 Sleet hails from the Minneapolis-St. Paul area. We love language and the written word, and we welcome both the beautiful and anti-beautiful.

In another life, Susan cleaned funeral homes and vacuumed around the dead. An unspoken element of respect existed within that job; as the intimate invitation into people's lives is never taken lightly. Susan's work has appeared in The Sun Magazine, Simply Haiku, elimae, .Cent Magazine, Rain Taxi Review of Books and Water~Stone Review. Her paintings have shown in the New England Review, Catamaran Literary Reader, Mud Season and December Magazine.

The Sleet Team – your work is safe with us.

Kathleen McEathron lives and works in Saint Paul, Minnesota. She writes fiction when she is not shoveling snow or mowing the lawn. Her goal is to develop characters that could serve as imaginary friends in a pinch.

Before receiving a 2013-14 Loft Mentor Series award in nonfiction, Pamela Schmid spent nearly a decade as a staff writer for the Star Tribune of Minneapolis. Her work has appeared in Barren Magazine, The Common, River Teeth, Bellevue Literary Review and elsewhere. She holds an MFA degree from Hamline University and is currently completing a memoir about the power of silence and words. Often, she can be found scribbling on Post-it® notes or her left palm, whichever is handier. Her online home is pamelaschmid.com.

Todd Pederson holds an MFA degree in poetry from Hamline University. His work is featured in the mnLit What Light program (www.mnartists.org), and “What Light,” an anthology that collects the work of 27 Minnesota poets. His criticism appears in online editions of the Rain Taxi Review of Books (www.raintaxi.com). Todd lives in Eden Prairie with his wife and two children, whom he thanks for their patience and inspiration.

Jamie Lynn Buehner is the author of Dessert Poems (Binge Press, 2012) and Catalpa (Red Bird Chapbooks, 2016). Her work has been shown in pioneertown., Sleet Magazine, The Midwest Quarterly, and the Wisconsin Review. She lives on the edge of the Tongass National Forest in Douglas, Alaska, with her husband, two children, and two cats. Follow her at http://angelfrommontgomery.wordpress.com.

Sleet Lady has been nominated 110 times for a Pushcart Prize. Rumor has it Sleet Lady nominated herself for the Nobel Prize, twice. And, she loves to tell the story of how she was at the bar with Hemmingway when he penned his famous one-line short story. Sleet Lady pioneered NASA's new top-secret poetry project, Flying Pearls, recently cancelled due to budget cuts, and is now busy developing a new cryptocurrency, Sleetcoin. Sleet Lady was reportedly on everyone's short list as a VP running mate but declined due to other commitments.